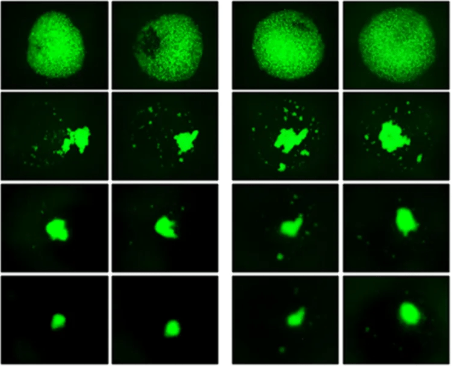 Application:
3D tissue model to evaluate role of a gene in tumor progression

Breast cancer is the second largest cause of cancer-related deaths in women, and it has been clinically sub-categorized into five distinct types: Luminal A, Luminal B, HER2-enriched, basal, and claudin-low. For several of these classes, successful targeted treatments have been developed, for example, HER2-positive subtypes can be targeted by anti-HER2 antibodies such as trastuzumab. However, there are several breast cancer variants that do not fit into these subcategories. One interesting recent find has been the marked over-abundance of the protein Bone Marrow Stromal Antigen 2 (BST-2) in many of these “uncategorized” breast tumors. Studies have revealed that BST-2 mediates various facets of cancer progression and metastasis in other types of cancers, and a recent study by Wadie Mahauad-Fernandez and colleagues showed that BST-2 is linked to poor survival of patients diagnosed with subclass-independent invasive breast cancer. Using TheWell Bioscience’s VitroGel® 3D-RGD tunable hydrogel to imitate the 3-dimensional tumor environment and the basement membrane obstacle encountered by invading cells, Mahauad-Fernandez and colleagues were able to show that inhibition of BST-2 expression by sensitized unattached cells to anoikis. Moreover, they demonstrated that that silencing BST-2 expression inhibited invadopodia formation, extracellular matrix degradation, and cell invasion, thus reducing the numbers of viable circulating tumor cells.

While this study made it clear that BST-2 plays a role in phenotypic outcomes that lead to invasion and metastasis of primary breast cancer cells, including its newly-identified role in invadopodia formation, its mechanism of action remained unelucidated. However, numerous unrelated studies have demonstrated that BST-2 acts as a homodimer and another previous study conducted by this group verified a similar mechanistic interaction in breast cancer cells: BST-2 promoted invasion and metastasis via the formation of BST-2: BST-2 dimers which ultimately promote cell-cell and cell-matrix adhesion, cell motility, survival, and growth. In light of these revelations, they sought to evaluate whether a novel BST-2-based peptide called B49,  a BST-2 derived peptide with modifications which was predicted to competitively disrupt BST-2 homodimerization, could regulate adhesion and growth of breast cancer cells and thus serve as a therapeutic target to prevent metastasis of BST-2 positive breast cancers. Again, using VitroGel 3D-RGD hydrogel, they evaluated the three-dimensional spheroid formation ability and anchorage dependence of cells exposed to B49. Results showed that breast cancer cell adhesion to other cancer cells or to components of the tumor microenvironment was inhibited by B49. Moreover, B49 treatment disrupted spheroid formation and primary tumor growth, and un-anchored cells were unable to survive, confirming that i) BST-2 plays a key role in mediating breast cancer cell adhesion and growth, and, more importantly, that B49 and its analogs significantly inhibit BST-2-mediated cancer cell adhesion and growth, introducing a promising potential therapeutic for currently detrimental BST-2-dependent cancers.

As with any cancer investigation, it is very important to accurately mimic the tumor microenvironment in order to assess the role of specific genes and to evaluate the effectiveness of putative therapeutics. For these studies, the tunable nature of VitroGel took the studies one step further: it enabled researchers to recapitulate the basement membrane that cancer cells must breakthrough in order to spread and colonize new locations. VitroGel allowed Mahauad-Fernandez to assess the ability of cells to migrate through the hydrogel and helped them to find that BST-2 promoted the formation of invadopodia, a previously unidentified role. Moreover, the accurate mimicking of the 3D in vivo environment allowed Mahauad-Fernandez and colleagues to easily verify they’re in vitro results in mouse models of BST-2 breast cancer and assess the metastasis of this type of cancer to the lungs. As a result of the translational nature of VitroGel, they were able to verify theirs in vitro findings with little worry of many of the variables often introduced by standard 2D culture, including altered cell behavior, morphology, and variations in exposure to therapeutics. This series of studies by Mahauad-Fernandez and colleagues have made great strides both to understand the role and mechanism of BST-2 in invasive breast cancer and to identify a potential therapeutic to prevent metastasis and treat cancer.