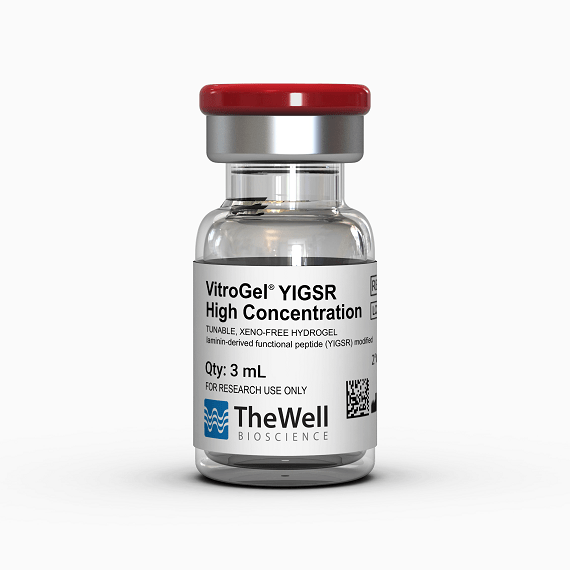 Laminins are extracellular matrix components of the basement membrane that play a critical role in tissue development and function. Laminins are ubiquitously expressed and have multiple biological and pathological functions, including cell adhesion, cell differentiation, cell migration, neurite outgrowth, and cancer cell metastasis. Laminins consist of α, β, and γ subunits, which assemble to form a cruciform heteromeric glycoprotein1, 2. The laminin β1 chain has seven structurally distinct domains and several important active sites that have been identified and used to produce synthetic peptides with functional readouts3. One such synthetic peptide, YIGSR (Tyr–Ile–Gly–Ser–Arg), which consists of residues 929–933 on the β1 chain, has multiple functions. This pentapeptide can bind to laminin receptors to activate signaling pathways and promote cell adhesion4.

YIGSR synthetic peptides are commonly used to promote cell attachment and may be used cooperatively with a variety of different biomimetic materials, including three-dimensional tunable hydrogels (VitroGel YIGRS, VitroGel LDP1, VitroGel LDP2). These peptides can facilitate cell adhesion, similar to laminin, in a number of cell types, such as cancer cells, fibroblasts, neurons, and glia, without altering the physiological response5. Promotion of cell spreading and colocalization with laminin receptors and adhesion signaling proteins has been observed in the presence of immobilized, covalently attached YIGSR4. When coated on a number of different surfaces, such as polystyrene, YIGSR can influence cell attachment and spreading of different cancer cell lines, such as mouse melanoma and human rhabdomyosarcoma cells6. Multiple other effects of YIGSR on cell lines have been shown as well; for example, YIGSR increased collagen synthesis in Hs27 human dermal fibroblasts7. Furthermore, endotheliocytes were shown to migrate toward a gradient of YIGSR, demonstrating the value of YIGSR in cell migration studies8. 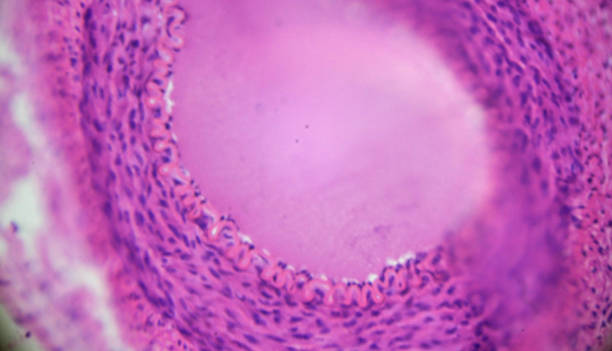 More recently, synthetic peptides, such as YIGSR, have been used to aid in creating three-dimensional stem cell spheroids and hydrogels in order to mimic a variety of tissues. By recapitulate a basement membrane-like environment, researchers have been able to induce asymmetric stem cell division in order to form stratified tissue-like spheroids9,10. In a recent study, YIGSR was tethered to hyperbranched poly-lysine peptides to form an environment conducive to stem cell survival and asymmetric division10. This environment allowed for the formation of three-dimensional human bone marrow mesenchymal stem cell spheroids. This basement membrane-like microenvironment leads to the clustering of integrin receptors, activation of intracellular signaling pathways, and regulation of the cytoskeleton. In addition to the spheroid formation, YIGSR may be used to study a number of cellular processes, such as cell survival, differentiation, morphogenesis, and regeneration, via covalent immobilization in three-dimensional hydrogels. Recently, a study using polyethylene glycol norbornene as a biomaterial made use of YIGSR as an adhesive substratum11. The researchers used YIGSR to investigate the combinatory effects of a three-dimensional environment and soluble biochemical cues on myofibrogenesis of human mesenchymal stromal cells. Moreover, other studies have tested the ability of YIGSR to act as both an adhesive source and cell survival factor for stem cells and neural progenitors in three-dimensional environments12,13. In another study utilizing three-dimensional matrices, YIGSR promoted the formation of compact aggregates of human pancreatic ductal epithelial cells14. These data illustrate the utility of YIGSR in studying a wide variety of biological processes in spheroids and three-dimensional hydrogel systems. 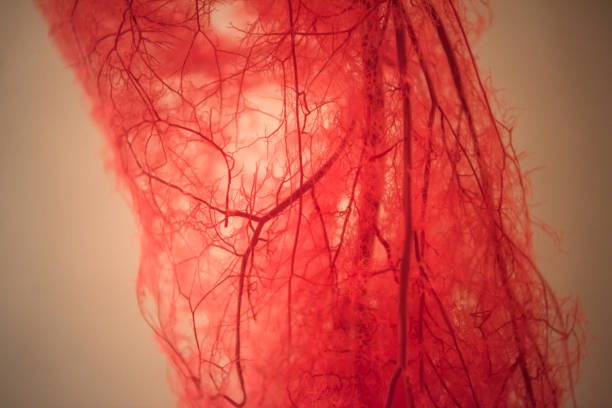 The immobilization, via covalent attachment to a biomaterial or surface, of YIGSR is required to yield the effects observed on cell attachment, spreading, and migration. In contrast, soluble, or non-covalently bound, YIGSR acts as an inhibitor to these cellular processes, due to laminin receptor competition. For example, human neuroblastoma cell attachment to laminin was inhibited by YIGSR, due to competitive binding21. Additionally, YIGSR was found to inhibit laminin induced hypercontractility of airway smooth muscle cells in both in vitro and in vivo models of asthma22. The ability of soluble YIGSR to act in an inhibitory manner, due to laminin receptor competition, has been used in a number of studies attempting to influence tumor growth, cancer cell invasion, and metastasis. Basement membrane extracts, such as Matrigel, and glycoproteins, such as laminin, create an attractive environment for cancer cell invasion. Furthermore, the 32/67 kDa laminin receptor correlates positively with tumor malignancy23. However, non-covalently bound YIGSR can bind to this laminin receptor resulting in reduced metastasis and tumor enlargement. In mice injected with melanoma cells, YIGSR was found to strongly reduce lung colony formation24. YIGSR inhibits growth and metastasis of melanoma and leukemic cells25. Human pre-B acute lymphoblastic leukemia cell colony formation and invasion was inhibited in the presence of YIGSR26. Laminin induced cell attachment of RCT sarcoma cells was decreased with YIGSR27. Additionally, YIGSR has been found to promote fibrosarcoma cell apoptosis28. Furthermore, when conjugated with polyvinyl pyrrolidone, YIGSR, showed exceptional anti-metastatic effects in B16-BL6 melanoma cells29. These data illustrate the utility of soluble, non-covalently bound YIGSR as a metastatic and tumor growth inhibitor.

Multiple studies have further demonstrated the usefulness of YIGSR by investigating, and comparing, the effects of this peptide with the RGD peptide. Non-covalent binding of YIGSR and RGD was shown to have synergistic positive effects on sciatic nerve generation30. Moreover, inhibitory effects on cell adhesion have been observed upon application of YIGSR and RGD in the presence of the basement membrane molecule laminin and fibronectin, respectively, due to receptor competition31. The synergistic effects of YIGSR and RGD have also been demonstrated in hydrogels. A recent study aimed at optimizing neuronal differentiation in three-dimensional hydrogels found an increase in the number of mature neurons, differentiated from induced pluripotent stem cells, in hydrogels treated with these peptides32. Multiple other studies have compared biological responses to YIGSR and RGD and found differential effects on cell adhesion5, cell mobility and migration33, 34, and tissue engineering35, 36. Taken together these data display the combinatory, and contrasting, effects of YIGSR and RGD on a number of processes and different cell types.