Application:
Use of VitroGel 3D for in vivo studies and assessing cell survival

Diffuse intrinsic pontine glioma (DIPG) is an aggressive childhood brainstem glioma that accounts for as much as 20% of all childhood brain tumors but has the highest mortality of any childhood brain cancer. The high mortality stems from the fact that treatment options for this cancer are extremely limited, as the tumor cannot be surgically resected due to its location in the brain, and it does not respond well to chemotherapy. More common treatments involve ionizing radiation, but this typically only offers palliative benefits, and most children succumb to the disease within one year following diagnosis, underlying the need for further understanding of DIPG pathobiology. Several ongoing studies have elucidated novel molecular targets, including TP53, ACVR1, PIK3CA, and protein phosphatase, magnesium-dependent 1, delta (PPM1D). While TP53 has been found to be mutated in 40–70% of DIPG tumors and has been extensively well-studied, mechanisms, whereby mutations in the other targets promote DIPG tumorigenesis, are less clear. Though previously identified in breast and ovarian tumors PPM1D has recently been associated with pediatric neuroblastoma and medulloblastoma and has been found to promote the activity of other oncogenes during tumorigenesis. For example, dephosphorylation of activating serine or threonine residues on p53, ATM/ATR, and CH1/CH2 have been demonstrated to promote tum9r growth. Moreover, truncated PPM1D variants identified in breast and ovarian cancers resulted in increased PPM1D activity, and an inability to be recognized by tumor suppression genes for regulation and a more recent study confirmed that PPM1D mutants were present in up to 25% of DIPGs. Most interestingly, DIPGs that harbor a PPM1D mutation tend to have a distinct phenotype from those with TP53 tumors, studies of PPM1D mutations in other cancers have purported a link between this anomaly and chemoresistance, highlighting the importance of understanding mechanisms of PPM1D mutation in DIPG pathogenesis and treatment responsiveness.

Recently, a study conducted by Mwangala Akamandisa and colleagues sought to answer some of these outstanding questions. Using both genetic and pharmacologic techniques, they assessed the survivability of organotypic brain slices and animal models in response to disrupted PPM1D signaling. They paralleled theirs in vivo findings with analyses of the viability of patient-derived DIPG tumor cells by conducting colony-forming assays with TheWell Bioscience’s VitroGel® 3D tunable hydrogel. They observed that stable introduction of clinically-derived PPM1D mutations yielded increased proliferation and impaired survival of mice. Moreover, they found that the mechanism by which the mutants engendered such poor outcomes was linked to an impaired DNA damage response through downstream effectors, including p53 and H2A.X. Using VitroGel® 3D to assess cell survival, they conversely noted that PPM1D-mutated DIPGs treated with a PPM1D inhibitor exhibited reduced proliferation and increased apoptosis. In vivo administration yielded prolonged survival of mice xenografted with DIPG cells, augmenting the effect observed during administration of radiation therapy alone, thereby confirming PPM1D inhibitors as a promising novel treatment for DIPG tumors.

Colony-forming assays, which assess in vitro cell survival, is the method of choice for determining cell reproductive death after treatment with ionizing radiation or other chemotherapeutic or cytotoxic treatments. Traditional colony-forming assays are conducted in 2D environments. However, as with all cancer studies, it is very important to correctly recapitulate the tumor microenvironment to assess the role of specific genes and to evaluate the effectiveness of putative therapeutics. VitroGel® 3D has offered a more translatable alternative to this critical assay. In particular, because Akamandisa and colleagues are studying a relatively inaccessible tumor, it is important to assess the viability of cells embedded with a 3D structure, which can lend more confidence when transitioning to in vitro experiments. Though future studies will be required to further assess the combination treatment of DIPG with PPM1D inhibitors and radiation therapy in vivo, these results gave a solid rationale for the continued development of clinically viable PPM1D inhibitors and their eventual clinical trials. 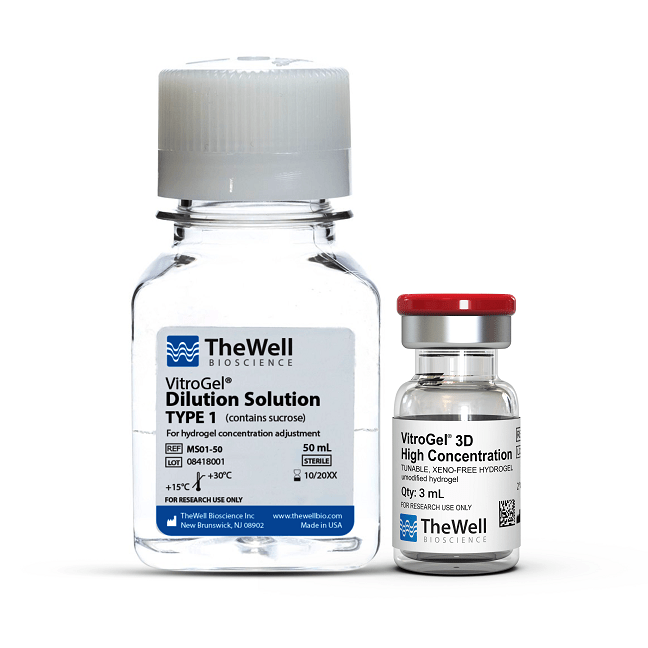