Glioblastoma is an aggressive type of cancer that occurs in the brain or spinal cord. Over the years, various models of glioblastoma have been developed to help understand the mechanism initiation and progression1,2. However, this has been complicated by the diverse and complex genetic and environmental factors that promote this disease and the uncertainty regarding the tissue of origin3.

Treatment for glioblastoma has also been difficult to develop because two-dimensional culture systems fail to mimic the tumor microenvironment. Tumor progression depends critically upon the interactions between the tumor cells and their microenvironment4. The tumor microenvironment is heterogeneous and dynamic; it consists of extracellular matrix, stromal cells, immune cells, progenitor cells, and blood and lymphatic vessels, which is impossible to recreate in a 2D environment. Various studies have shown that tumor cells cultured two-dimensional environments exhibit distinct differences in cell proliferation ability, resistance to apoptosis, differentiation ability, invasive ability, and even biomarker expression5,6. Moreover, it isn’t enough to simply study tumor-derived cells; tumors are inherently three-dimensional, and that morphology plays a role in tumor progression, namely angiogenesis, a critical factor in malignancy7. Additionally, cancer cells with properties similar to stem cells have been found in glioblastomas and are thought to contribute the high resistance to conventional treatments and the high recurrence rate8. Therefore, accurate and effective development of treatments for glioblastoma will require 3D models that closely mimic the cell-cell interactions exhibited in 3D tumors.
U-87 MG cells are a line of human primary glioblastoma cells9 that are commonly used in studies aimed at understanding causality and progression of glioblastoma. Here we discuss the growth of these cells using our 2D and 3D VitroGel® tunable scaffolds.

U-87 MG cells were maintained in Eagle’s Minimum Essential Medium supplemented with 10% FBS and 1x pen-strep. Cells were passaged when the cultures reached 80-90% confluence. For 2D hydrogel coating culture and 3D cell culture, both VitroGel 3D-RGD and VitroGel RGD-PLUS were used, according to the user handbook, as described below.

2D coating hydrogel was prepared at 1:0, 1:1 and 1:3 dilutions with VitroGel Dilution Solution (Type 1) and then mixed with U-87 MG medium without cells at 4:1 ratio; 300 μL added to each 24-well plate. The hydrogel was stabilized at room temperature for 20 minutes, then cells were added on the top of the hydrogel suspended in 300 μL of cover medium. Medium was changed every other day.

Hydrogel was prepared at 1:1 and 1:3 dilution with VitroGel Dilution Solution (Type 1) according to manufacturer protocol. For confocal/fluorescent imaging, cells were cultured 8 well chambers with cover glass on the bottom, using 200 μL hydrogel per well. Medium was changed every other day.

To investigate whether our 2D VitroGel system is conducive to the growth of U-87 MG cells in a two-dimensional system, we cultured them various dilutions of two of our VitroGel products. U-87 MG cells were harvested from a human glioblastoma tumor, and although it is in their inherent nature to cluster when they are cultured in standard 2D culture, they adopt fibroblast-like morphology and only make small aggregates (Fig 1A). In the VitroGel hydrogels, the cells exhibited substantially more spheroid clustering, even at the lower dilutions (Fig 1B-E). In the 1:3 dilutions of both hydrogels (Fig 1C, E), the colonies formed are smaller, but in the new softer VitroGel RGD-PLUS, the cell clusters exhibit an interesting morphological characteristic: they form bridges between the clusters (Fig 1E). 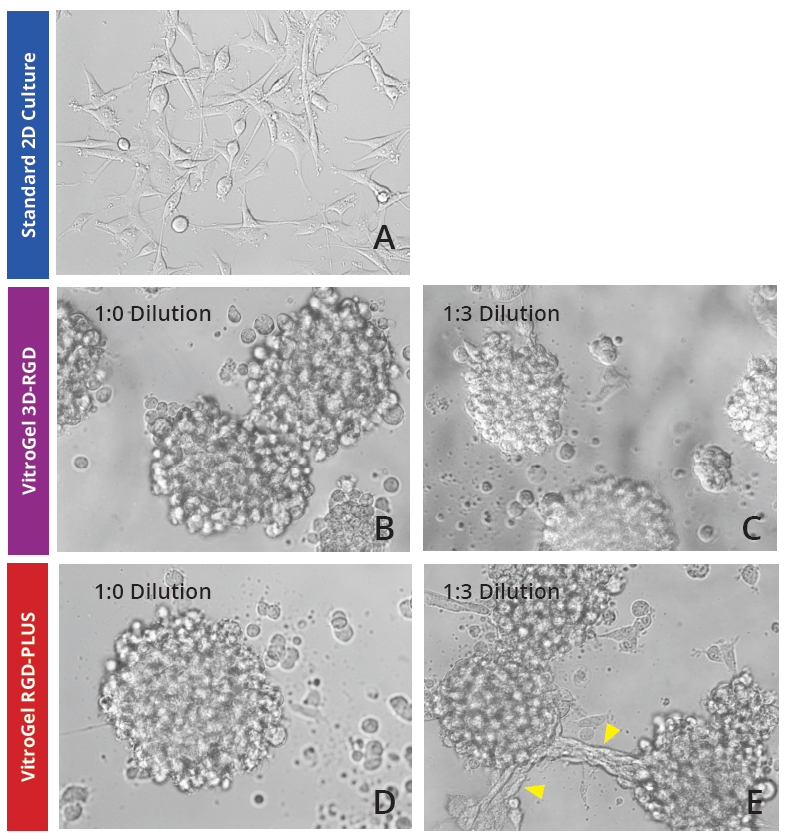 To further investigate the ability of VitroGel RGD-PLUS in promoting intercellular networking, we culture U-87 MG cells in three-dimensional culture at different dilutions. We found that in both concentrations of the original VitroGel 3D-RGD, cells can settle and grow in the hydrogel (Day 2, Fig 2A-B), but after seven days (Fig 2D-E), their overall spread has not changed, and they can form the cluster structure but do not exhibit the intercellular network connections (Fig 2E). In the VitroGel RGD-PLUS, not only do cells settle into the hydrogel by day two, but they also exhibit markedly different morphology from the cells in the VitroGel 3D-RGD: they are more elongated and start to build an intercellular network. After 7 days, they exhibit broad cell-cell connections within the 3D hydrogel (Fig 2H-I) in clusters much larger than the VitroGel 3D-RGD (Fig 2J). 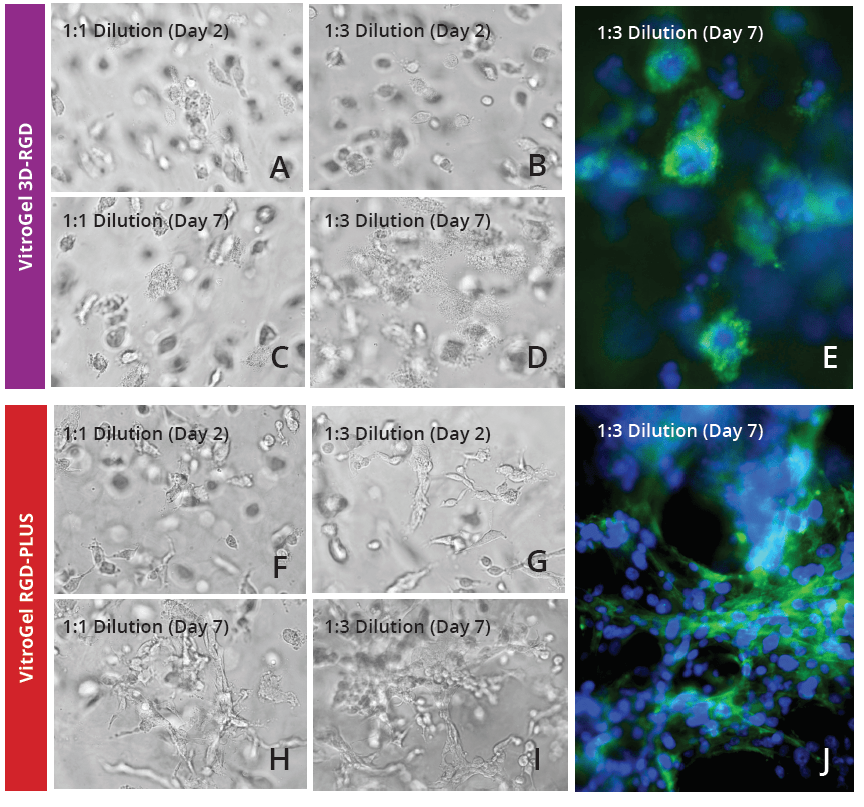 Figure 2: U-87 MG cells cultured in both VitroGel 3D-RGD and VitroGel RGD-PLUS. Cells can grow in 3D hydrogel at 1:1 and 1:3 dilution of both hydrogels. Cells incorporate into the hydrogel in VitroGel 3D-RGD (A-D), but are not able to form network connections (E). However, in the new VitroGel RGD-PLUS, cells incorporate after 2 days (F-G), but they are able to form intercellular actin connections by day 7 (H-J).

Unlike the spheroid structure in VitroGel 3D-RGD, U-87 MG cells create better cell networking structures in VitroGel RGD-PLUS, indicating better cell-cell and cell-matrix interaction. These interactions are a crucial part of properly recapitulating in vivo tissue organization and regeneration and cancer in vitro. Although this is acknowledged, researchers have found it difficult to address, since there isn’t merely one solution to this problem. For example, in a standard in vivo cell niche, there are various types of cell interactions, shapes, junctions, etc10. Studies on currently existing 3D scaffolds have shown that the cohesive forces between cells, which drive the surface tension of the tissue and thus cell fate, can vary greatly between different parts of a tissue11,12. This can become problematic considering that some 3D matrices are more suitable to certain cell types and not others, introducing a certain level of variability into studies trying to use 3D methods of cell culture. This is evident even with our own studies. We see that different concentrations of the same matrix can lead to different cell behavior, even if cells are capable of growing in all concentrations.

The ability to generate proper extracellular matrix interactions will also be a crucial part to properly understand the tumor microenvironment. A great deal of cancer progression is due to the ability of tumor cells to interact with their surroundings. For example, during tumor growth, the metastatic process begins with oxygen and nutrient deprivation, which triggers the release of angiogenic growth factors and cytokines that will cause blood vessel generation13,14. This nutrient and oxygen deprivation only happens after a certain threshold of growth that cannot be achieved in 2D culture, and which will require appropriate cell-cell and cell-matrix interaction in order to achieve in vivo modeling15.

Our studies and others suggest that a more tunable system can ultimately have the most promise to truly model in vivo systems in vitro. The future of organ regeneration will require the development of platforms that can capture the complexity of the in vivo extracellular matrix properties while also being able to tune matrix properties to provide the in vivo environment for the variety of cells within a tissue. Future cancer studies will rely on a 3D tunable system that will give a realistic representation of solid tumor growth and will also give a realistic recapitulation of how the tumor will respond to putative treatments. Previous studies with VitroGel tunable hydrogels have demonstrated that they are a viable option for drug testing, and various studies have already demonstrated success with this hydrogel in cancer studies15-19. The enhancement of cell networking capabilities in the new VitroGel RGD-PLUS indicates that this new matrix may provide a viable solution to cancer and regenerative medicine studies. 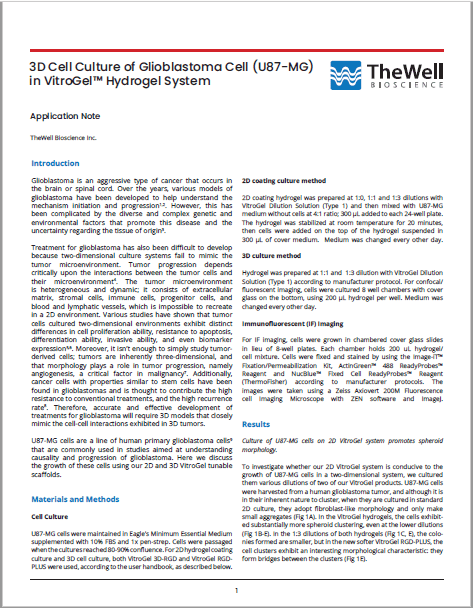 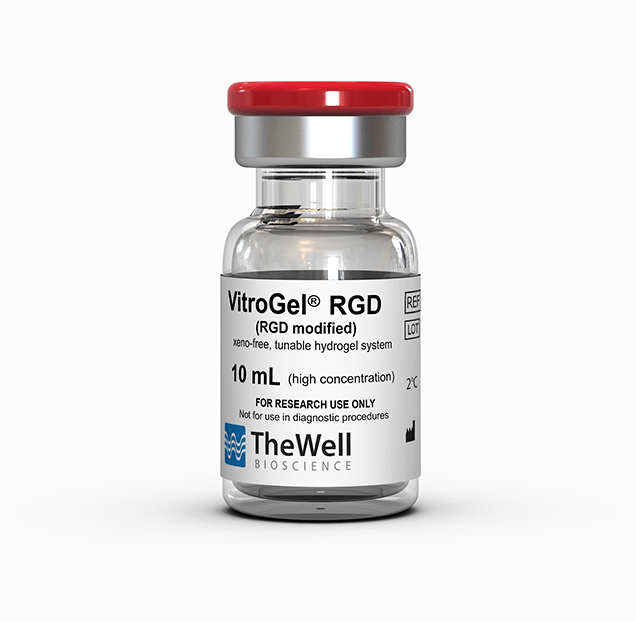 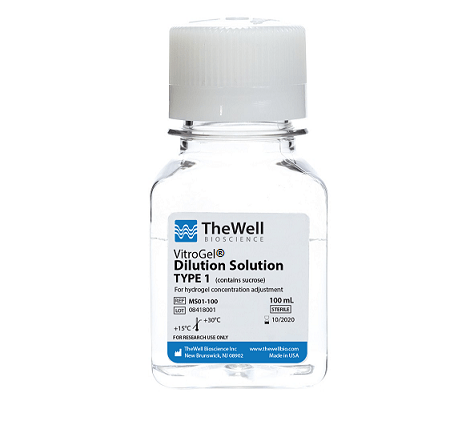